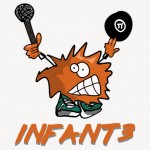 Paco Infante
Born in Melilla Spain
He started as a DJ in 1988 at the height of the Acid House boom.
His passion for music is between working as
radio announcer for "40 PRINCIPALES" in 1990
In 1992 he moved to Madrid to complete his image and sound broadcast studies.
Radio DJ and Radio Producer in the "Cadena SER" and 40 PRINCIPALES during the years 1990-1993.
In 1994 he began to work on Television producing numerous video clips for artists combined with the work of DJ / Producer until today.
Among his works we can find the song "San Lorenzo's Beach" inspired by the nights on the Melilla beach that bears the same name, published by Rack Records Music.
He has collaborated with Munko, Carlos Caballero, Markus Kirchner and Andy Silva

Infant3 does not have a Spotify Play List yet