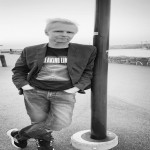 Ari Inkiläinen was born in 13th of December 1971, in Finland. He is a music composer, producer and actor. He was interested of music already in a school and when was just a kid then most of all his biggest target was rhythm instruments. The big interest came to the keyboards and synths, as he got older. During his teens he did expand his interest for electronic music and was very taken by the synth music. He traveled at his teen times a lot around the world and in many countries and took influences of other cultures for his cultural life and for his own crowing art life. He also lived the longer period in England. The first works were very experimental ones as samplings of other artists and searching the different kind of sound worlds that comes out of synth keyboards. He has studied also singing and composed, produced songs as poems also.

Sagi does not have a SoundCloud Tracks yet

Sagi does not have a Spotify Play List yet