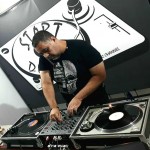 Curitibano Marco Dusch moved to São Paulo in 1987 and at the age of 9 he listened to the first radio programs mixed by DJs and interest arose. As time went by, his mother encouraged him by buying his first vinyl record, inevitably he became friends with people who played at parties and had sound teams who played at schools and friends' parties. They encouraged him to have more knowledge about what was happening at the time with “Dance Music”. With his own will and enthusiasm he began to learn to mix in a 3 in 1 device. Marco learned to mix successfully and consequently the opportunity to play in small parties with friends and like any DJ. Promoting his work to a nightclub DJ (Bateu Mouche), he was invited to play for the first time. His sympathy and talent led him to play in several places in São Paulo and other states. Parties and Clubs where he played: Taj Bar (Curitiba). Cultural Current 2014 (Curitiba). Pandora House (Curitiba). Cosmoon Summer Beach Hydra Concept Lounge(Caiobá). In Side Music Bar (Curitiba) . Bartho Music Bar(Curitiba) . Hysteria Tour (Concordia-SC) . Porto Santo Canto (Guaratuba-PR) . Boobalai Club (Curitiba) . Rave Crazy Land (Curitiba) . Justa Causa Cine Bar (Curitiba) . Saturday Night Dancing Music (Curitiba) . In Juana La Cubana Club (City of East-PY). He was organizer and DJ of Feira do Vinil at Canal da Música from 2012 to 2018, being among the best in Brazil. (Curitiba). Ghetto Room Underground live and party project with DJ Jeff Neves (Curitiba).

Marcodusch does not have a Spotify Play List yet